Sandrine Dudoit Named Fellow of the Institute of Mathematical Statistics

Sandrine Dudoit Named Fellow of the Institute of Mathematical Statistics

UC Berkeley Statistics Department Chair and Professor Sandrine Dudoit has been named a Fellow of the Institute of Mathematical Statistics (IMS). She was one of 41 IMS Fellows selected in 2021.

Dudoit, who is also a professor in the Division of Biostatistics in the School of Public Health, was cited for “excellent research on the statistical foundations and implementation of statistical genomic methods with particular focus on high-throughput methods for gene expression profiling; for development of open-source statistical software for biomedical data analysis, especially her role in founding and contributing to Bioconductor, an open-source development platform; for excellent teaching and graduate and postgraduate student mentoring; and for extraordinary university leadership.” 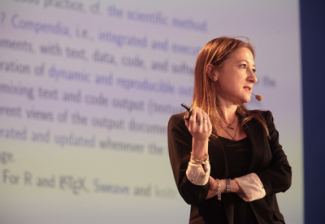 Created in 1935, the Institute of Mathematical Statistics is a member organization that fosters the development and dissemination of the theory and applications of statistics and probability. The IMS Fellow has been a significant honor for over 85 years. Each Fellow has demonstrated distinction in research in statistics or probability or has demonstrated leadership that has profoundly influenced the field.  Each Fellow nominee is assessed by a committee of their peers for the award. In 2021, after reviewing 75 nominations, 41 were selected for IMS Fellowship. The IMS has 3,500 active members throughout the world. About 15 percent of the current IMS membership has earned the status of fellowship.