In Memory of David Blackwell

In Memory of David Blackwell 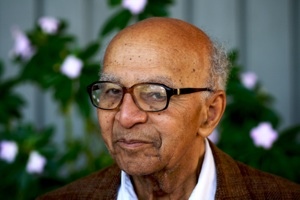 Emeritus Professor David Harold Blackwell passed away peacefully in Berkeley July 8, 2010. Professor Blackwell was born in Centralia, Illinois on April 24, 1919. Throughout his academic career he was a most distinguished teacher and researcher. He taught at Howard University for ten years before coming to Berkeley in 1955. At Berkeley he had appointments in both the Mathematics and Statistics departments. He became Emeritus Professor in 1989. Professor Blackwell will be missed by many communities.

A memorial event will be held to honor and celebrate his life on Friday, October 15, 2010 at 4pm in the International House of UC Berkeley on 2299 Piedmont Avenue, Berkeley, CA 94720.

Parking on the UC Berkeley campus is very difficult. In non-metered areas, street parking is free. Meters are free with a California disabled placard.