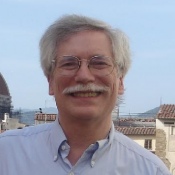 Ken Wachter has held a joint appointment in Demography and Statistics at Berkeley since 1979. He received his B.A. from Harvard in 1968 and his Ph.D. in Statistics from Cambridge in 1974, completing a thesis on random matrix eigenvalues under the supervision of David Kendall and John Kingman.

After time at Bell Laboratories, at St. Catherine's College, Oxford, and teaching at Harvard, he came to Berkeley originally as a Miller Fellow. His books include Statistical Studies of Historical Social Structure (1978), Height, Health, and History (1990), and the collection Between Zeus and the Salmon (1997). ``A Mutation-Selection Model for General Genotypes with Recombination'', written with Steve Evans and David Steinsaltz,  has just been published (2013) as a Memoir of the American Mathematical Society.

A member of the National Academy of Sciences since 1999, he serves on the Editorial Board of PNAS handling social sciences. His wife is a CAL alumna and his poodle Ambrose an enthusiastic CAL fan.