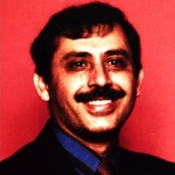 Kooros Mahjoob died on December 15, 2021 at the age of 80. He joined the Food and Drug Administration (FDA) in 1987 and was Deputy Director of the Division of Biometrics when he retired in 2015. He is survived by his wife Delia, one sister, and two brothers.

Kooros was born in Tehran, Iran. His family moved later to Isfahan where he completed his elementary and high school education. He joined Tehran University in 1960 after passing their highly competitive entrance exam. Kooros received Bachelor’s and Master’s degrees in 1963 and 1965, both in Mathematics. He worked for several years as a statistician at the Institute for Economic Research of Tehran University before moving to UC Berkeley for further education. He worked with David Blackwell on his PhD dissertation and graduated in 1981.

He began his professional career with short stints as visiting faculty at Michigan State University and UC Santa Barbara before joining the University of Georgia as assistant professor. He decided on a change of career in 1987 and moved to the FDA where he served close to 30 years as a mathematical statistician in the Office of Biostatistics (OB) within the Center for Drug Evaluation and Research (CDER). He started as a statistical reviewer, became a team leader, eventually Deputy Director of the Division of Biometrics. Located within OB, the Biometrics Division provides statistical expertise and support in evaluating drugs and therapeutic biologics within the Cardiovascular, Renal, Neurological, and Psychiatric Therapeutic areas. Kooros was an integral member of OB senior leadership and played key roles in determining and implementing overall statistical policy for CDER. He retired from the FDA in 2015.

Kooros enjoyed playing the violin. One of us (MD) was his classmate and coworker at Tehran University, his roommate at Berkeley, and his best friend for over 62 years. The other (VN) met him when he joined the Department as a new graduate student, and Kooros immediately took the new kid on the block under his wings. He was one of the kindest, caring, and genuine persons we’ve known. He had a great sense of humor, infectious laughter and love for people and life in general. Kooros is dearly missed by his family members as well as friends and former colleagues from academia, government, and industry.